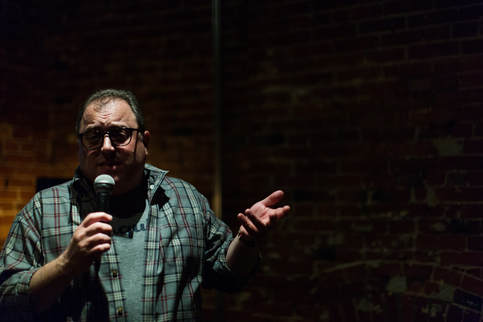 Comic, producer, promoter, essayist, social media gadfly, husband, dad, smoker of cigars, consumer of burgers, pizza, tacos, vodka gimlets, COFFEE . . . I am or have been rightfully accused of being all of the above.

I'm a regular on the St. Louis standup comedy scene where I've been a host and featured comic at Cracker's Comedy Club (Indianapolis)  Helium Comedy Club, Back Door Comedy Club (RIP), and a special guest at the Funny Bone Comedy Club. I've performed on multiple independent showcases and booked mics in Missouri, Illinois, Iowa and the United Kingdom as well as virtual shows across the United States. I've been a featured comic on live variety shows such as The Catalogue, Fancy Things, Hi Hello Welcome and The Bunker. I've been a storyteller and panelist on the independent comedy storytelling show "Sorry, Please Continue," and have also appeared in sketch comedy shows such as "Fatal Bus Accident" and “Boondoggle”.

I have produced standup comedy showcases in St. Louis and beyond. I also operate in tandem with the independent comedy collective Impolite Company and frequently perform on its monthly comedy showcase at The Crack Fox.

I am a principal of St. Louis Independent Comedy, a promotional hub for the St. Louis independent comedy scene which operates a website and several social media platforms in an effort to promote local comedians, comedy ventures and the businesses and individuals who support the scene.

I am also about 50 pounds lighter than the person you see in most of the photos on this website. The fives of dollars I pull in from this gig don't afford me the luxury to pay for new ones.